It has been reported that Manchester United legend Sir Alex Ferguson has rated just four of his former players as ‘world class’. 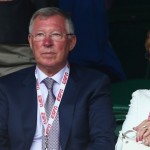 The Scottish tactician managed the Red Devils between 1986 and 2013 and saw hundreds of players come and go during his successful era at Old Trafford.

Ferguson believes that the term ‘world class’ gets bandied around a little too much these days and in his new book, Leading, identified only a quartet of stars he had at his disposal that fit into that echelon including Real Madrid star Cristiano Ronaldo, the great Eric Cantona and United heroes Ryan Giggs and Paul Scholes.

“If you read the papers or listen to the television commentators, we seem to be awash with ‘world-class’ footballers,” recalled Ferguson.

“In my book there are only two world-class players playing today: Lionel Messi and Cristiano Ronaldo.

“I don’t mean to demean or criticise any of the great or very good footballers who played for me during my 26-year career at United, but there were only four who were world class: Cantona, Giggs, Ronaldo and Scholes.

“And of the four Cristiano was like an ornament on the top of a Christmas tree.”