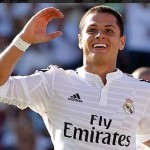 Reports are out claiming that Orlando City are closing on a deal for Real Madrid striker Javier Hernandez.

Chicharito is playing on-loan at Real this season from Manchester United and will be sent back to Old Trafford at the end of the campaign.

Negotiations are at an advanced stage and the Orlando side are keen to strike a deal.

There was a huge crowd at their last home game and the city fully supports its MLS team. The club’s owner, Flávio Augusto, is trying to build up the franchise and ensure the continued presence of the city’s thousands of Latin American fans at games.