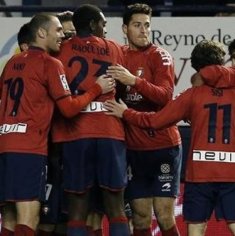 The forward’s emphatic finish was enough to see Osasuna scramble out of the relegation zone and into the relative safety of 16th place ahead of the remainder of the weekend’s fixtures.

Osasuna have now put together a four-match unbeaten run to ease their troubles at the foot of the standings, while Rayo’s second loss in three saw them miss the chance to climb into sixth.