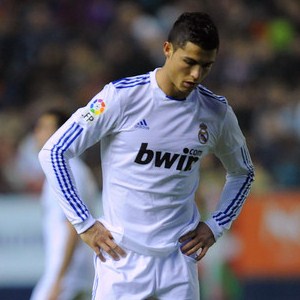 Javier Camunas broke the deadlock with a shot off the post in the 62nd minute of a typically bruising battle at the Reyno de Navarra stadium.

Mourinho responded by throwing new loan signing Emmanuel Adebayor into the fray, but they were unable to find a way past a side who had not won in their previous eight games.

Real’s second defeat of the season left them second on 51 points from 21 games, behind Barca with 58 after the champions won their 15th consecutive match 3-0 at Hercules on Saturday.