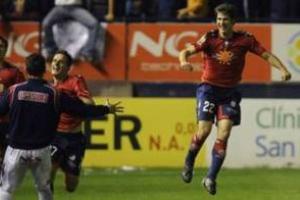 A terrible defensive error by Barcelona’s Rafael Marquez handed Osasuna an injury-time equaliser in a 1-1 draw in Pamplona.

The normally reliable Mexico defender, who had ironically been brought on as a second-half substitute to replace the shaky-looking Dmitro Chygrynskiy, dilly-dallied in the final seconds of injury time to allow Javier Camunas to drill a low cross that Gerard Pique turned past his own keeper Victor Valdes.

In truth Barcelona barely deserved the win, which Seydou Keita seemed to have given them during the second half of a poor game.

With 18 minutes left, the Mali midfielder finished into an open net after Carles Puyol’s cross wreaked havoc in the home penalty area.

But Marquez’s howler let the hosts snatch a point that reduces Barca’s lead at the top of La Liga to just one point over Real Madrid, who were victorious against Getafe.