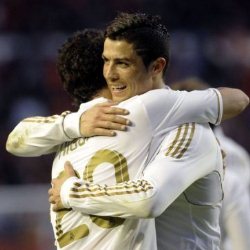 A stunning volley from Karim Benzema was the highlight of a brutal 5-1 win away at Osasuna as Real Madrid continued their march towards the Spanish title and notched up 100 goals for the season in La Liga.

Benzema opened the scoring after only seven minutes with an outrageous effort that instantly recalled Marco van Basten’s seminal goal for Netherlands in 1988, and what followed was a relentless procession of Madrid attacks, punctuated only briefly by a reply from Nino just after the break.

By that point, though, Madrid had already opened up a three-goal lead with Cristiano Ronaldo converting with another ferocious shot and Gonzalo Higuain lifting the ball over Andres Fernandez for a rather more considered finish.

Ronaldo added a fourth, and his 37th of the league campaign, when his free kick took a fortunate deflection to sneak past Fernandez and the forward then set up Higuain for the fifth, and Madrid’s 100th in La Liga this season, with 13 minutes remaining.

The emphatic victory – which concluded with Osasuna being reduced to 10 men when Roland Lamah was shown two bookings for dissent in the space of five seconds – saw Madrid pull nine points clear of great rivals Barcelona ahead of the Catalans’ match against Athletic Bilbao later in the evening.