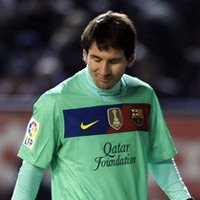 Barcelona’s fading hopes of capturing a fourth consecutive La Liga crown suffered a major setback when they lost 3-2 at Osasuna on Saturday to leave Real Madrid seven points clear at the top with a game in hand.

In freezing conditions in Pamplona, Osasuna striker Dejan Lekic scored twice inside the first 22 minutes and Barca, who have struggled on the road all season, waited too long to react.

Spanish World Cup winners Xavi, Andres Iniesta and Cesc Fabregas started on the bench, and although Alexis Sanchez pulled one back for the visitors in the 52nd minute, Raul Garcia quickly restored Osasuna’s advantage.

Barca’s youth team winger Cristian Tello grabbed a second in the 73rd but a late charge just failed to produce the equaliser.

The world and European champions’ second defeat of the season left them on 48 points, seven short of leaders Real, who host high-flying Levante on Sunday.