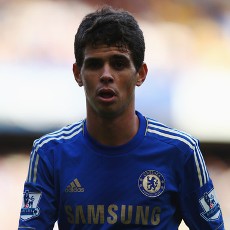 Chelsea midfielder Oscar is is confident that they can win silverware this season, despite managerial upheaval.

The 21-year-old Brazilian international claims he joined the European champions to win silverware and is glad he decided on the Blues after attracting a host of interest in the summer.

He told FIFA’s official website: “Chelsea were the best fit for me. They were the champions of Europe, playing in the Premier League, which is maybe the best league in the world.

“Chelsea also showed me they have a lot of ambition, and I knew it was the right club for me.

“I want to win the biggest titles in the world and I feel I can do it here. I’m very happy I joined Chelsea.”

Edinson Cavani : We Are Ready To Take On Chelsea!