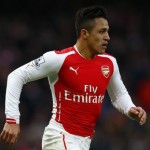 Alex Oxlade-Chamberlain reported that Alexis Sanchez is inspiring his Arsenal teammates to lift their standards.

The Chile international was again the Gunners’ talisman against Stoke on Sunday, scoring twice and setting up the opener in the 3-0 victory which moved Arsene Wenger’s side to within a point of fourth-placed Manchester United.

“When you see someone working hard from the front and maybe if they close three players down and don’t win the ball back, then you are not there to back him up, you do have to look at yourself and think ‘why was I not there to help my team-mate out?’ It does set the tone for the rest of the team,” said Oxlade-Chamberlain.

“If the boys up front react quickly when we lose the ball, it brings the midfield with them, full-backs and the defenders to switch from attack to defence. It is something that we work hard on.

“Alexis does it better than anyone I have seen. He has come from Barcelona, and it is a strong philosophy that they play by, so maybe he has picked that up there and brought that to us in every game he has played.

“There are definitely a lot of boys learning from him.”