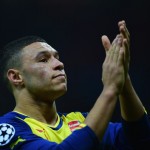 Alex Oxlade-Chamberlain has revealed that Arsenal’s players are responsible for the fans’ abuse directed at manager Arsene Wenger.

The Gunners beat Newcastle 4-1 on Saturday to ease some of the pressure on Wenger.

“It’s a hard one for me to say what I would say to the fans,” he said.

“I understand their frustration. I would definitely say that and they are completely entitled to their own opinion. They pay good money to follow us around and support their club.

“I am sure they have supported us for a number of years so they are definitely entitled to their opinion and I can understand their frustration. But I wouldn’t put that on the manager. We have to stand up ourselves as players.”