Reports are out claiming that Arsenal midfielder Alex Oxlade-Chamberlain insists their young team can handle the atmosphere at Champions League opponents Galatasaray. 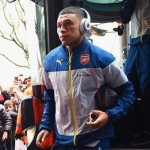 Oxlade-Chamberlain, at only 21 now considered an established member of the first team, has every confidence in the young squad players.

“First of all, they are all boys who play for Arsenal Football Club, which warrants definite respect straight away. They all have quality,” he said.

“For all young players, you have to start somewhere, and you have to be challenged at some point, the young lads who are in the squad if they have the chance that is their chance to prove their point and prove they are capable.”

Oxlade-Chamberlain added: “Everyone is individual and I guess you can play without fear, that can be the best way to approach a big situation like the Champions League.”