It has been reported that Alex Oxlade-Chamberlain was delighted for Yaya Sanogo after he scored in Arsenal’s win over Borussia Dortmund. 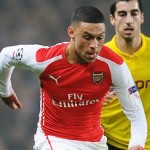 It was the French striker’s first goal for the club.

“It’s important he got that goal, it’s been a long time coming,” said Ox.

“In pre-season he showed us what he could do, and he took [the chance] tonight. It was a good start for him, a goal always helps your confidence and I thought he played really well.

“He held the ball up well and hopefully he can score a few more like that.”