Arsenal attacker Alex Oxlade-Chamberlain has declared that there’s plenty for fans to be excited about his season. 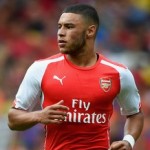 The England international star feels there are plenty of reasons for Arsenal, who beat Manchester City to win the Community Shield at Wembley, to be positive.

“It is early in the season and you could argue not everyone is at their peak fitness yet, understandably, but that will come soon and we will get better from here,” he said, reflecting on their 0-0 draw at Besiktas in the first-leg of their Champions League qualifier.

“The technical side of our game will improve. I am confident of that, but the togetherness and the will to win is definitely there.

“That is our basis to start from and then the technical side needs to come after, so we will push on from here.

“The important thing now is to switch our concentration to Everton away at the weekend, which will be a tough game and then we think about the Champions League again next week.”