Reports are out claiming that Arsenal manager Arsene Wenger has urged Alex Oxlade-Chamberlain to have more self belief in his abilities. 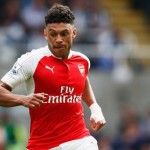 Oxlade-Chamberlain has certainly developed into a quality player since joining Arsenal from Southampton back in 2011.

Now 22, ‘The Ox’ will have to take steps towards fulfilling his potential by delivering consistent performances on the pitch and Wenger has urged the England international to have more belief in order to make the most out of his extraordinary talent.

Wenger said: “He is at the age now where he is getting picked regularly for the national team. He is picked by me as well for the team. It is a very important season because of the nature he is growing. You feel the evolution has a sense of responsibility.

“I would like him to play with the freedom and express the desire of his talent.”

Arsenal Set To Announce The Signing Of Santi Cazorla