It has been reported that Arsenal attacker Alex Oxlade-Chamberlain has welcomed the arrival of Calum Chambers from Southampton. 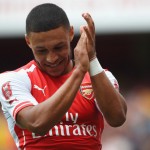 The England international left the south coast club in 2011 aged 17 — around 18 months younger than Chambers when he joined the Gunners last month for £16million.

“I’ve tried to take him under my wing,” he said. “I know Calum from when we were at Southampton together. We are getting on really well and I’ve been trying to help him get [settled] into the club. It can be a big step up but he has adapted really well.

“On Saturday, he looked like he had been playing with us for ages. He is a good lad and everyone likes him so I am sure he is going to do well here. He has gelled with the team [already].”