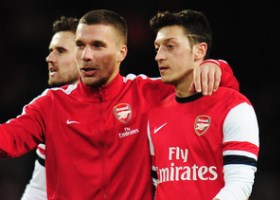 The German international playmaker has warned his team-mates that the Munich club pose a great challenge.

“I have huge respect for Bayern,” he told Bild am Sonntag newspaper.

“They are even better than they were last year, but we’re not going to hide.”

The 25-year-old – who remains cautious – believes Arsenal have reason to be optimistic going into the tie.

He added: “Anything is possible over two legs. I’m the kind of player who loves games like these.”