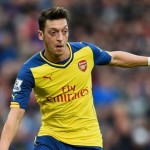 Reports are out claiming that Arsenal defender Per Mertesacker has revealed that he and teammate Mesut Ozil were suffering from post-World Cup trauma in the initial stages of the season.

The towering centre-back was heavily criticised for his performances in the first half of the season while Ozil suffered an injury during the same period after the pair played key roles in Germany’s triumph in Brazil last summer.

The German international said: “It was difficult to come down and forget being a World Cup winner. You need to calm down and restart. I didn’t know how to handle it. The season starts, there were new targets to be focused on.

“I was happy not to get an injury, but on the other hand it was very difficult to get back my form and fitness. Mesut had an injury – his body was telling him he was not ready. We didn’t have a pre-season. The season was already being played when we started.

“It was a mental as well as physical problem. Without a pre-season, physically to come back to compete at Premier League level is hard. We weren’t there mentally or physically in the first half of the season. We had a post World Cup trauma.”