It has been reported that former Chelsea star Michael Ballack rapped Mesut Ozil over his penalty miss for Arsenal last night. 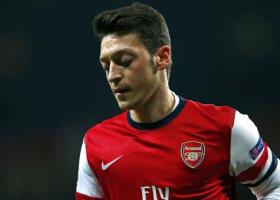 Ballack said: “Ozil did not look confident – he walked to the ball slowly, so maybe there is someone who wants it more, but there wasn’t.

“He has the ability to score from 12 yards, it’s not a big deal but there was just no confidence.”

Seydou Doumbia Makes A ‘Come And Get Me’ Plea To Arsenal