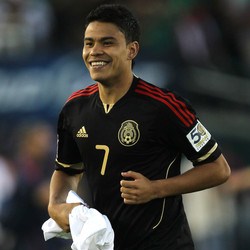 The Mexico international star travelled to Spain for a medical, with the West Ham website explaining the player had been loaned out “after struggling to adapt to life to London since his arrival from Mexico because of language and personal reasons”.

The 24-year-old, who joined the Championship club in July 2010 from Nacional, started the Hammers’ Carling Cup defeat by Aldershot on Wednesday evening.

Barrera’s only previous appearance this season was a substitute in the opening-day defeat by Cardiff.