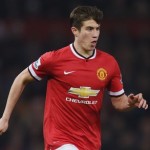 It has been reported that Paddy McNair hopes to soon make a first team return at Manchester United.

The Northern Ireland international defender made his Premier League debut earlier this season.

McNair told manutd.com: “Every day I’m coming in and trying to and impress the manager and all his staff. Hopefully I can get as many games as I can towards the end of the season. I’m training with world class players every day – that’s only going to make me better.”

McNair echoed captain Wayne Rooney’s sentiments by saying that only a win on Saturday against Aston Villa will add true value to United’s 2-1 victory at Liverpool.

“If we drop points to Aston Villa then the win against Liverpool won’t be worth all that much.”

David De Gea Closing In On Goalkeeper Of The Year Award