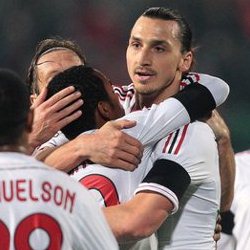 Zlatan Ibrahimovic made an emphatic return to the AC Milan side as the Rossoneri moved four points clear at the top of Serie A with a 4-0 win over Palermo.

The Sweden international scored a 14-minute hat-trick on his return after a three-game suspension as the Rossoneri cruised to victory in Sicily.

Thiago Silva added a fourth goal as Milan put the ball back in second-placed Juventus’ court in the race for the Scudetto.

For Palermo, coach Bortolo Mutti is now set for an uncomfortable debrief with the club’s president Maurizio Zamparini.