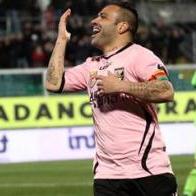 Lazio had defender Andre Dias and coach Edoardo Reja sent off as they crashed 5-1 at Palermo, where five players shared the goals for the hosts.

Lazio took an makeshift injury-hit team to Sicily and fell behind after 10 minutes when Paraguay midfielder Edgar Barreto scored from the edge of the area.

Massimo Donati also scored from the edge of the area 10 minutes later and Argentine defender Matias Silverstre headed the third just before the break.

Igor Budan and Fabrizio Miccoli added two more within six minutes of the restart and Lazio were in further disarray when Dias was dismissed for a second bookable offence and coach Reja was ordered from the touchline.

Palermo appeared to ease off and Libor Kozak pulled one back for Lazio with five minutes left.