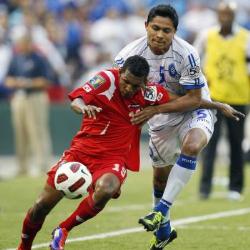 Panama scored in the 90th minute to tie the game and went on to beat El Salvador 5-3 on penalties on Sunday, earning a place in the semi-finals of the CONCACAF Gold Cup against the United States.

With the teams locked at 1-1 after extra time, Panama converted all five penalties they attempted and El Salvador missed their first spot kick from substitute Dennis Alas.

El Salvador opened the scoring in the 78th minute when striker Rodolfo Zelaya, who missed a penalty attempt in the first half, converted a second penalty attempt after he was brought down by defender Roman Torres.

El Salvador looked certain to hang on and advance to the semi-finals for the first time until Panama evened the score after a late goal-mouth scramble.

From close-range, Luis Tejada got a header that was ruled to have crossed the line. Tejada also converted the decisive spot kick in the shootout.

Panama will now play the U.S. Wednesday’s in Houston after the Americans beat Jamaica 2-0 in the earlier quarter-final at RFK Stadium in Washington DC.