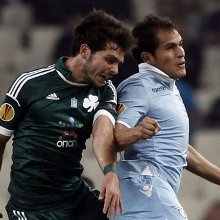 Toche was Panathinaikos’ Europa League hero again as his last-minute goal earned a 1-1 draw with Lazio.

Giorgos Seitaridis’ farcical own goal gave Lazio a half-time lead but Toche poached a late equaliser, having also scored the goal which earned his side a point against Tottenham last time out.

After pre-match clashes outside the ground saw four spectators detained by police, the game got underway with Antonio Candreva forcing an excellent early save from home keeper Orestis Karnezis.