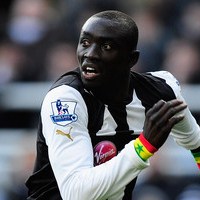 Newcastle United debut hero Papiss Demba Cisse has admitted that he could be playing for Bayern Munich.

The Senegal international scored on debut in victory over Aston Villa.

“They were willing to pay Freiburg’s asking price, but suddenly Freiburg refused to let me go. I was p****d off.

“My agent told me Bayern Munich had shown an interest. Had it become concrete, I would have moved there.” Liverpool Yet To Receive Arsenal, Liverpool Offer For Daniel Agger