It has been reported that Park Ji-sung is returning to Manchester United as a club ambassador. 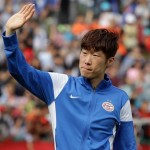 The 33-year-old, who retired in May, will appear alongside ex-boss Sir Alex Ferguson on the pitch ahead of Sunday’s match against Everton.

Park said: “I’m looking forward to once again representing United and sharing some of these memories with our global fan base.”

With United amassing sponsors globally, Park will be key to satisfying their demands for promotional events.