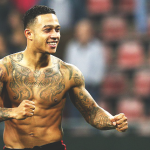 It has been reported that Manchester United hero Park Ji-Sung is expecting big things from Memphis Depay.

The PSV Eindhoven winger is joining United this summer.

Park played with Depay during his second spell at PSV last season and told manutd.com: “He’s still a young player – only 21 years old – but I played with him and he has so much potential: he has strength, passing ability and skill.

“Some people say he’s like Cristiano Ronaldo and I can imagine that – he really has the desire to be the best player and United can help him achieve that. It’s a really good signing for both him and the club, and I’m sure he’ll show his quality for us.”