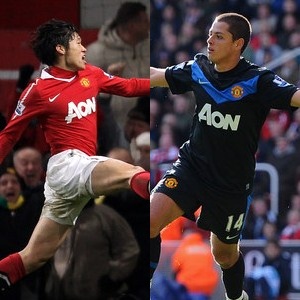 Both Manchester United stars scored wonderful goals with their heads this season. Mexican international Javier Hernandez scored a sensational goal with the back of his head against Stoke City and South Korean international Park Ji Sung scored a similar type of goal against Arsenal recently.

But whose scored the better goal? Hernandez had to jump real high and connect with the back of his head while Park had to adjust his body and even took a whack at his face to score the goal against Arsenal.

Both goals were crucial for United in the race for the Premier League title this season. However, what we would like to know from you is who scored that better goal?

Watch the video below and vote to find out what others think. Cheers!