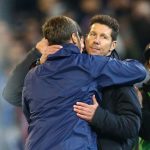 It has been revealed that Arsenal hero Ray Parlour would welcome Atletico Madrid coach Diego Simeone as Arsene Wenger’s successor.

Wenger will celebrate 20 years as Arsenal boss on 22 September, but is yet to decide whether to extend his deal at Arsenal beyond its expiry the end of the 2016/17 season.

Parlour told talkSPORT: “Simeone, whether he would want to move from La Liga we don’t know, but I’m sure he would like to test himself in the Premier League against the likes of [Pep] Guardiola, [Jose] Mourinho, [Jurgen] Klopp and managers like that.

“He would be the favourite if it came to Arsenal changing the manager at the end of the season.”