Reports are out claiming that Arsenal legend Ray Parlour believes that the Gunners have missed out on sending a ‘massive statement’ to the league after succumbing to Manchester United 3-2 on Sunday. 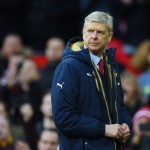 Parlour believes that the Arsenal squad lacks the desire, grit and togetherness to win the Premier League and also claims that North London rivals Tottenham Hotspur are looking much more capable of winning the league this season.

He said: “I didn’t see anyone on that pitch demanding more from the players. The big players didn’t turn up and at the back they were all over the place.

“The most important thing is the leaders. When the going gets tough you need people like that; when I played we had Tony Adams and guys like that demand more from you when you’re up against it.

“Swansea on Wednesday is now a massive game for them and then they play the north London derby, and at the moment, Spurs are looking a much more complete team than Arsenal.

“It’s undoubtedly a big blow to Arsenal because with the players United had out it was a real opportunity for them to set their stall out.

“They’ve got some massive away games coming up and this was a chance to make a massive statement at Manchester United.

“Now they’ve got to beat Swansea and Spurs and they are really up against it. If they play like they did against Manchester United there is no way they’ll win the league.”