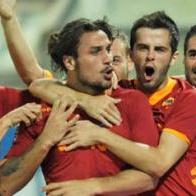 Luis Enrique’s Roma enjoyed their first victory of the season in Serie A as they won 1-0 at Parma courtesy of a Pablo Osvaldo header at the Stadio Ennio Tardini.

Osvaldo netted his second goal in two games on 50 minutes when he rose to plant the ball beyond home goalkeeper Antonio Mirante from 10 yards out after a fine cross by Aleandro Rosi in the Sunday night match.

Roma coach Enrique was hoisted up in the air by a member of the Roma coaching staff at full-time having endured an indifferent start to life as the Rome club’s head coach with a defeat and two draws in his opening three matches in Serie A.

Roma extend their unbeaten record against Parma to 13 matches. They have won 10 of those, and were good for this victory despite failing to add to their one-goal advantage.

Roma move up to 10th spot in the table, but Parma are in the bottom three with only one win from their first four games in the league.