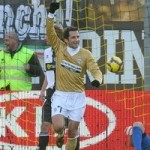 The defender headed into his own goal after the hosts had failed to clear a corner, with the 30-year-old only able to steer the ball past the helpless Antonio Mirante.

Hasan Salihamidzic had headed Juve into an early lead before veteran forward Nicola Amoruso grabbed an equaliser for Parma.