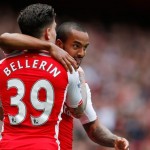 Reports are out claiming that Arsenal forward Theo Walcott believes his patience has paid off after his quick-fire hat-trick against West Bromwich Albion on Sunday.

Walcott, who was sidelined for almost 10 months with a knee injury last year, has been limited to only a handful of opportunities this season but took his chance when he was given a start in the final game of the season.

“It’s nice to be playing,” Walcott told Sky Sports after scoring three times in the first half in the 4-1 triumph over the Baggies.

“I’ve been very patient. When I’ve been given the opportunity in the last few weeks, I’ve been ready and very positive.

“It’s worked for me today. It’s nice to have a run up front and to grab the match ball is a great achievement personally. But more importantly, the team is looking sharp going into next week’s final.

“You need to be patient with yourself when you’ve been out for nearly a year. It’s always going to take a similar amount of time to come back but the manager has been patient. I’ve been patient and when I’ve been given the opportunity, I’ve tried to take it.”