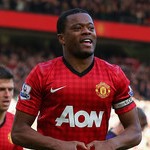 Patrice Evra blasted back at Arsenal boss Arsene Wenger over his role in the dismissal of Jack Wilshere on Saturday.

Gunners boss Wenger claimed the Manchester United skipper went down like he had been ‘killed’.

But Evra said: “I think he didn’t look for the ball.

“He stood on my legs and it wasn’t the first time.

“The referee did a good job and that’s it. That’s the rule of the game.”