It has been reported that Manchester United hero Patrice Evra is impressed by Anthony Martial. 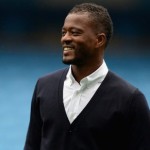 The Juventus fullback has worked alongside the United striker this week with the France squad.

“This is the first time I saw a match from him (against Denmark). He’s impressive,” Evra told RMC.

“I hope he takes care of himself well and works on his recovery.

“He needs to keep playing at such a high pace. Every ball he touches, he accelerates with it and will shoot often.”