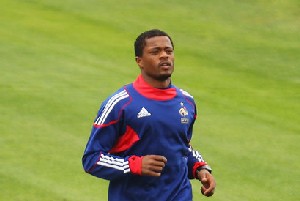 More bad news from the French camp and it is now reported that Patrice Evra may stand down as France captain for their final World Cup group game.

The Daily Mail has reported that as the 2006 finalists’ embarrassing World Cup campaign went from bad to worse on Monday, there was a suggestion in France that captain Evra may be considering his stance ahead of the game against South Africa.

Asked if some players would refuse to play, coach Raymond Domenech said: “It is a possibility.”

Evra was thought to have been one of the ringleaders when Domenech’s players refused to train on Sunday in protest at the French Football Federation’s decision to send home Chelsea striker Nicolas Anelka in the wake of the 2-0 defeat to Mexico.

Other players known to have endorsed the striker are William Gallas, Thierry Henry, Eric Abidal and Franck Ribery.

The French trained as planned on Monday ahead of a game they must win well if they are to have any chance of qualifying for the next stage.

Domenech said: “To say the least, this game has been difficult to prepare for.

“On Sunday I tried to convince the players of the unprecedented stupidity of what they were about to do. I completely support the expulsion of Nicolas Anelka.”

Terry Accuses Klasnic For Spitting At Him