It has been reported that Patrice Evra has signed a one-year contract extension at Manchester United. 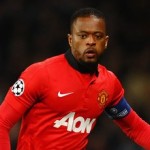 The French international fullback was considering leaving United after eight years at the club, but he has decided to extend his contract, which was due to expire next week, by another 12 months.

Evra, who was reported to be in talks with Juventus earlier this week, would also help Luke Shaw’s transition into the United first team, should the club complete the signing of the England international this summer from Southampton.

Evra’s contract extension will be welcomed by the vast majority of United fans, who have taken the 33-year-old to their hearts since he joined from Monaco in 2006.

Evra is a popular member of the dressing room too and is also renowned for his leadership skills.