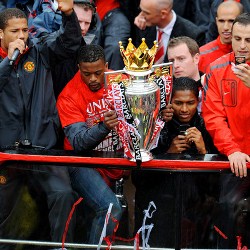 Came across this rather interesting video on the net.

This incident happened on the 30th of May 2011 in Manchester, England during Manchester United’s Premier League Winners Parade.

United defender, Patrice Evra played a prank on his team-mates by pretending to drop the Premier League trophy off the bus.

We all know Sergio Ramos dropped the Copa del Rey and Maarten Stekelenburg did the same with the Dutch trophy.

The French international however did not drop the trophy and it was all good fun in the end. Wonder what Sir Alex had to say about that.