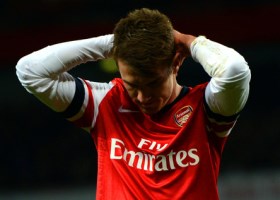 The French icon is now in charge of the development squad at Manchester City.

The 37 year old said: “Aaron has been terrific and fantastic.

“He has been the best and most consistent player in the Premier League.

“If Arsenal are top it’s because he has been the best player as the start of the season.”

He added: “Arsene is really good at developing and trusting young players. What’s stopped Ramsey’s progress was injuries in the last few years but now he has sorted that out.

“Credit to Arsenal and Arsene who believed in him.

“And credit to Aaron as well because even with all the injuries, he’s kept working hard, believing in himself and that he could make it.

“The ability has always been there and I’m pleased he is now showing what he is capable of.” Oxlade-Chamberlain, Ramsey Set To Return To Action For Arsenal