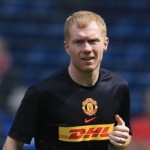 It has been reported that Manchester United legend Paul Scholes hopes they can land Barcelona midfielder Cesc Fabregas.

The former Arsenal midfielder is seen at United as a direct replacement for the retired Scholes.

Scholes told Sky Sports : “He’s proven in the Premier League, obviously he’s with Barcelona, it’s a big club, it will be difficult to get him away from there. But if you do, you have to fancy your chances strongly that we can go on and be successful with a player like that in your team,”.