It has been reported that Manchester United legend Paul Scholes is happy to see winger Jesse Lingard being given a chance by Louis van Gaal. 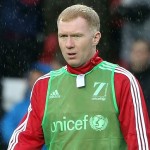 Van Gaal has given the youngster his chance in recent weeks and Lingard has responded, keeping £25m summer signing Memphis Depay out of the first-team picture.

Scholes told the Daily Star Sunday: “It’s been good to see Jesse in the team. It’s good to see a young lad come through the ranks and do well.

“I thought he was United’s best player against CSKA Moscow in the Champions League recently.” Man Utd Players Feel We Can Beat Anyone – Ashley Young