It has been reported that Manchester United boss Louis van Gaal is unconcerned over criticism coming his way in the early days of his reign. 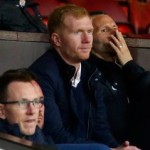 This week former United midfielder Paul Scholes claimed he was “scared” of the future he envisaged for the club.

“Paul Scholes has to believe in the philosophy,” said Van Gaal.