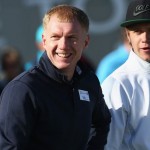 It has been reported that Manchester United legend Paul Scholes says they need to make FIVE signings this summer.

Scholes, 40, believes United will have to invest heavily in five different positions if they are to have any chance catching both Chelsea and Manchester City.

He said: “I think they will be looking at three or four players.

“A centre-half, a right-back, possibly another goalkeeper, a top class centre-forward and possibly even a wide player – so that’s five players.

“We’ve seen Manchester United in the big games, against the big teams and they’ve not been far away.

“They probably play better against the big teams and if they can carry that consistency throughout the season against the lower table teams they might have a chance [of winning the title].

“Manchester United have a long way to make up with Chelsea and Manchester City – we know that.

“There is quite a gap to reach the top two [Chelsea and Manchester City and it’s a gap they will have to try and bridge over the summer.”


Arsenal Shopping In France Ahead Of The Summer Market