It has been reported that Manchester United legend Paul Scholes has criticised England coach Roy Hodgson for not selecting Michael Carrick in his World Cup squad. 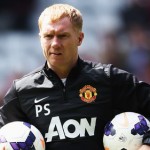 It is said that Scholes fears England will be caught out if Steven Gerrard breaks down.

He wrote for his Paddy Power blog: “Not bringing Michael Carrick is a mistake.

“If there’s an injury to Gerrard nobody jumps out to replace him, assuming Roy will play “the Liverpool way”. I don’t see Henderson, Frank Lampard or Jack Wilshere playing that role.

“At a certain age, you can’t bomb forward any more. You learn to stay back and dictate a match. That’s the big difference between Steven and Frank Lampard, for example. I’m not sure Lampard has the ability to control a game. He’s always someone who’s up trying to score goals. BREAKING NEWS: Wayne Rooney is not even on the bench for Fergie’s last game!