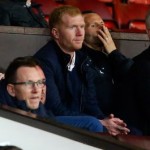 Reports are out claiming that Manchester United legend Paul Scholes is unimpressed by their style under manager Louis van Gaal.

Scholes, speaking on the Fletch & Sav show, declared: “It’s not great to watch – put it that way. I’ve heard Van Gaal say recently that United can’t take risks, but what message does that send to the fans?

“It’s all about taking risks as a Manchester United player and having the balls and tenacity to go out and attack the opposition.

“They’re (the fans) used to watching United teams that play high intensity football and score plenty of goals – and that just hasn’t happened this season.

“The two centre forwards – whoever has been playing up there in different games this season – have not been good enough either.

“He (Rooney) scores goals, creates them and gives endless amounts of energy – this is Wayne Rooney – how many goals has he scored for Manchester United and England?

“He’s wasted in midfield or on the wing, he’s got to be playing upfront.”