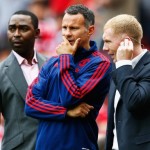 It has been reported that Manchester United legend Paul Scholes has criticised the team’s showing against Newcastle United on Saturday,

In his post-match conference for the goalless draw against Newcastle, manager Louis van Gaal claimed he was satisfied with the team’s performance.

However, the former England international begged to differ, slamming the 0-0 draw at Old Trafford.

“He (van Gaal) said ‘fantastic’ a few times but I don’t think there was anything fantastic about it at all. At home to Newcastle you are expected to win the game.

“Their goalkeeper (Tim Krul) has had (serious) one save to make, so that is not fantastic. The money the manager has been given, he needs to produce and needs to do it this season.”

United will head to Belgium this week for their second leg of Champions League qualifier against Club Brugge.