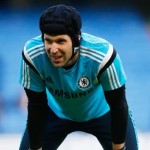 Reports have emerged claiming that Paul Scholes believes Petr Cech would be the perfect replacement for David De Gea.

The Manchester United legend suggests veteran Chelsea goalkeeper Cech would be a great fit for the famous club if star Spaniard De Gea happens to leave Old Trafford for Real Madrid this summer.

‘If De Gea does go, United should sign Petr Cech,’ wrote Scholes in his column for The Independent.

‘I remember the effect Edwin van der Sar had on the club when he arrived in 2005. United had struggled since Peter Schmeichel to find a really commanding goalkeeper.

‘Edwin came ready-made. He was a Champions League winner, he had four years’ Premier League experience with Fulham, and in the end our manager got six extremely successful years out of him.

‘Cech has only just turned 33. He could potentially play another six years for United.

‘There would be no concern about having to give him time to play his way into the position or the demands that the Premier League makes of a goalkeeper new to the country.

‘United won’t want to lose De Gea but there is a solution in the offing.’

Cech, who is being heavily linked with Arsenal, is set to leave Stamford Bridge at the end of the season as he does not plan to play back-up behind Blues first-choice gloveman Thibaut Courtois.