It has been reported that Manchester United legend Paul Scholes feels the club must stand by manager David Moyes. 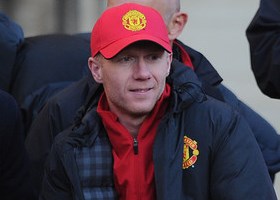 United were outclassed 3-0 at home by Manchester City last night.

On Moyes, the 39 year old said: “You have to stand by him. He’s made a couple of signings that haven’t quite worked out yet and in the summer he’s going to need backing – there’s no doubt about it. Was he backed as well as he could have been last summer? I’m not too sure.

“It looks to me like there are a few areas that need addressing. Centre midfield you could say they’ve been looking at that for a few years and haven’t quite find the answer. Defensively, with Vidic going, it looks like Rio and maybe Evra’s going that’s three of your back four gone.

“I think going forward we’re alright. The quality of Van Persie, Rooney and Mata in his right position I think we’re alright up there it’s just midfield and defence where he needs to look.”