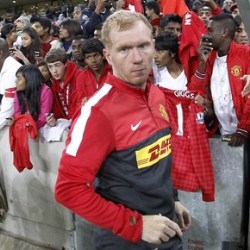 Paul Scholes has urged his young teammates to grab their chance on tour.

The veteran Manchester United midfielder has always been a huge advocate of Jesse Lingard and played alongside the teenager in midfield against AmaZulu while Marnick Vermijl, Davide Petrucci and Federico Macheda also trained with him last term.

“I’m glad these young players are here,” he informed MUTV.

“For the first half of last year, I worked with a lot of these players and know what potential they’ve got and how good they can be.

“They proved that in the Reserves last year and went on to win nearly everything they were in, I think, and now this is a big chance for them to step up to the first team and show what they can do. On the evidence of the game the other night, they all stepped up and played really well.”