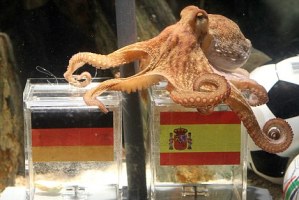 William Hill believe punters gambling on Paul the Psychic Octopus’ World Cup selections have won up to half a million pounds from the betting industry with their wagers.

Hills spokesman Graham Sharpe said: “Paul’s incredible eight winning selections have won any punter who bet £10 on each one of them almost £200 each, while punters far-sighted enough to keep re-investing their winnings on the next selection all the way through will have won at odds in excess of 300/1 – and there are thousands who are squids-in thanks to the psychic cepholopod.

“Picking all of Germany’s victories, their two defeats, and Spain’s World Cup final triumph was one of the finest tipping feats ever,” added Sharpe. “We can but hope Paul has gone to a rest home for retired octopii by the time the next World Cup gets under way.

“Fortunately for us, though, there were plenty of punters who ignored Paul’s tips, and they have contributed an excellent profit for us on a record betting turnover for a sporting event of £1 billion.”

Rooney Hopes Ronaldo Doesn’t Make It To The World Cup